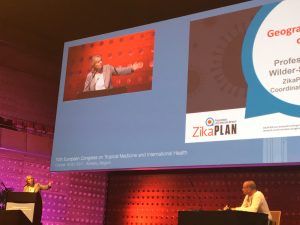 During the European Congress on Tropical Medicine and International Health (ECTMIH) conference in Antwerp, the three EU-funded Zika Consortia, ZIKAlliance, ZIKAction and ZikaPLAN organized a joint symposium, with an afternoon of presentations packed with up-to-date science regarding ZIKV on October 17th. Later in the evening, the three consortia held their first joint Scientific Advisory Board (SAB) meeting. The three coordinators, Xavier de Lamballerie, Carlo Giaquinto and Annelies Wilder-Smith presented their projects to the SAB and invited researchers from each consortium. Thomas Jaenisch presented the ongoing collaborative efforts around the pregnant women cohort studies of each project. The Preparedness Research Capacity Network, REDe, an online platform and regional network for knowledge-sharing, was presented by Trudie Lang. The attending SAB members gave their input and expressed their appreciation for the collaborative efforts among the consortia and how the discussions provided them with a better overview of these projects. One SAB member, Duane Gubler based at Duke-NUS, Singapore, said “a biobanking programme put together by the three Zika consortia would put the diagnostic capability of flaviviruses some light years ahead”.

The SAB was followed by the joint Ethics Advisory Committee (EAC), and the joint Executive Committee (ExCom) meetings on October 18th, to further discuss the common work packages to ensure a harmonized approach across consortia, where possible.