Is adaptation to the placenta a strain-dependent feature of ZIKA viruses? - Zika

Is adaptation to the placenta a strain-dependent feature of ZIKA viruses? 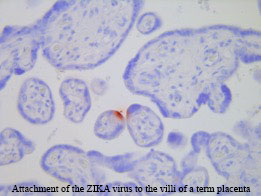 In the pathobiology of ZIKA infections, placental crossing represents one of the most critical aspects of the host-virus interaction, and yet information about the mechanisms underpinning this feature are poorly understood. A growing body of literature suggests that ZIKA viruses can target the placenta at all stages of pregnancy, residing in particular at the level of the fetal macrophages, the Hofbauer cells. Whether or not these cells can act as a source of infection for the fetus and the mother is still unknown. Studies in the PATHO WP, within the ZIKAction consortium, aim to answer two main questions: a) is replication in the placenta a strain-dependent feature and is it prone to adaptation? b) What is the role of sub-neutralizing/cross-reactive immunity acquired from prior ZIKA/Dengue exposures in the crossing of the placenta?

For question a), researchers decided to compare the progenitor MR766 virus with three strains isolated in the Pacific, South and Central America belonging to the Asian lineage. To define the phenotype of replication at the level of the placenta, villous explants collected from cesarean sections were challenged with different doses of the viruses. Results indicated that all of the strains, including the African progenitor, have the ability to establish an infection even at very low doses. Nonetheless, differences in the magnitude of infectivity were significant and ranged from 2-3 Log. Inspired by these results, the researchers tested the direct attachment to term placentas using labeled viruses and realized that for some strains binding was more abundant, localizing in specific parts of the syncytiotrophoblast, while for others was almost non-existent.

Although still preliminary, these results clearly show that not all ZIKA strains behave in the same way at the level of the placenta.

Characterizing these differences in replication and attachment might prove crucial for the identification of markers of adaptation, hence offering an additional tool for the prediction of virulence and vertical transmission upon sequencing of diagnostic samples.

Francesco Bonfante is a veterinary virologist working with the Istituto Zooprofilattico Sperimentale delle Venezie (IZSVe) in Padova, Italy. He is a member of the ZIKAction consortium and one of the leaders of Work Package 3 (ZIKA-PATHO).