The Republic of Cabo Verde is an archipelago country formed by 10 volcanic islands (nine inhabited) located in the Atlantic Ocean, about 500 kilometres (310 miles) off the coast of Senegal in West Africa. It has a combined area of 4,033 square kilometres (1,500 sq miles). According to the census of 2010, the country’s population was 512,096 with about 65% living in urban areas[1].

Cabo Verde is part of the Sahelian arid belt, hence it receives irregular rainfall between the months of August and November. Due to the inadequate water supply and irregular distribution of rainfall, the population is forced to harvest water in household reservoirs. This increases the breeding sites of mosquitoes, including in the households.

In September 2015, the Central Hospital in Praia, the capital of Cabo Verde, reported the first case for Zika virus infection witch were confirmed by Institute Pasteur of Dakar (WHO reference laboratory). Confirmed cases were detected in four island bat Santiago being the hardest hit. The outbreak peaked in the first week of November 2015 and has been on the decline since, as indicated in the figure below. The las confirmed case was in April 2016. 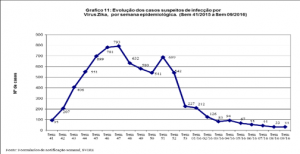 Total cases reported was 7629 suspected cases of Zika virus infection had been registered in Cabo Verde among them, 165 were pregnant women.

Cabo Verde reported its first case of microcephaly on 14 March 2016, a baby girl born to a 25 year old mother from Santiago island.  Total of children with microcephaly 15 cases (9 at Praia, 4 Fogo, 2 Maio) including 1 death. 3 was other central nervous system troubles.